Ross Hewitt on the Chevalier Couloir

The chevalier couloir is rarely skied when you take into account the very quick and easy access from the top Grand Montets lift station. A sustained and steep (50 degree) couloir, it is definitely a must do for anyone who wants to start pushing their skiing grade. The easy access though belies the rather harder entrance into the couloir itself which can be a bit of a nightmare.
To access the top of the couloir you can either boot pack your way up to the demi-lune on the left hand side of the Petit Aiguille Verte or ski tour up most of it then climb up the final 70m or so where it becomes too steep to tour. (Crampons and ice axes are a must for this couloir)

Once you arrive at the demi-lune then you can either ski straight off from there which involves a steep narrow section (not recomended unless there is a good snow coverage) or you can downclimb a small section until you can traverse out right and join the wider main couloir. From here you can anchor yourself to a good rock spike and put on skis etc. From there on its just a fantastic sustained couloir that brings you straight down to join the many ski tracks coming off the Grand Montets. However due to the steepness of this couloir it isnt recommended that you follow up behind someone else. There were 4 of us and by the time we had skied it the snow had slid leaving a rather hard ski for anyone behind. Alternatively you can just climb up to the demi-lune and just ski back down the way you came up on the north face of the Petit Aiguille Verte. Though not as steep and long as the Chevalier it is more sheltered from the sun and can make an interesting extension onto the Pas de Chevre. Ross Hewitt in the middle of the couloir Ross Hewitt nearing the end of the chevalier Jon Baird skiing down towards the Argentiere glacier 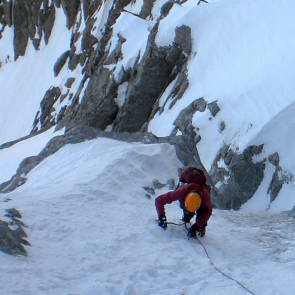 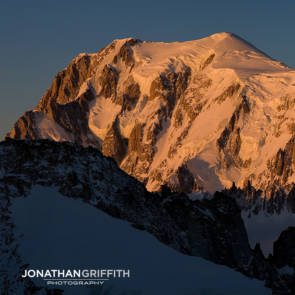 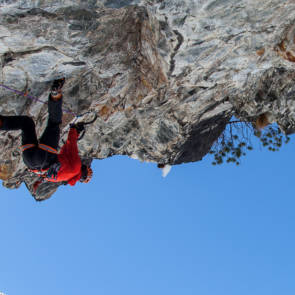 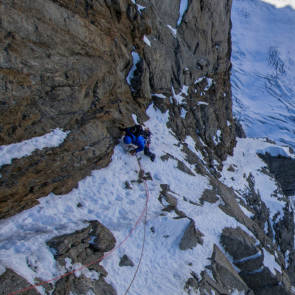