Its been a great week with settled weather over the alps for the first time in a while. Everyone has been scurrying up high and getting up to lots of impressive climbing- numerous parties have been on the hard classics in the area and with hot conditions prevailing all of next week too there should be lots to do.

As for me, last weekend saw Matt Perrier and I head up for the traverse of the Grandes Jorasses which is a two day climb from the Helbronner over the Rocheford arete to the Canzio Bivy hut and then up and over the Jorasses to Courmayeur far below. We left really early from a bivy at the Helbronner to get far along the Rocheford for sunrise pics. Regardless of getting images though its alot faster if you leave well early as there is alot of snow ridge to get across and as soon as the sun hits it it can be a nightmare. 5 hours later we arrived at the Canzio and spent the day sleeping and eating and drinking in preparation for the next day (well what else are you going to do?)

Matt Perrier on the Rocheford Arete, Mont Blanc in the background Matt Perrier on the final snow slopes of the Rocheford, Sun rising over the Grandes Jorasses

The next day saw us leave at 4am and straight onto the traverse. The weather forecast for that day was not great as a large storm system was meant to pass over from the west in the afternoon….hence leaving so early. Thankfully some nice guides have attached fixed ropes for the first two crux pitches of the traverse which was much appreciated as it was pitch black when we started off.

Hours later we were still on the rock section of the traverse which we found to be very laborious and time consuming. It just keeps coming….But the views are pretty exceptional and getting to peer down the North face down this year’s Autumn and Winter hopefuls was awesome. 8 hours later and the rock was finally over and we found ourselves at the Pointe Croz. From here its a 1 1/2 hour snow plod to the Pointe Walker but by now the weather had started to arrive and it was actually snowing very lightly so we thought it best to get out of there as fast as possible and headed down the Croz rap lines. As it turns out the weather system never really arrived and about an hour after bailing it cleared up again…typical. Matt Perrier descending the heavily crevasses glacier of the Jorasses

After an arduous walk back down to Courmayeur and beers and pizzas in town we headed back to Chamonix where I made plans with Kenton Cool to head up the following day to the Grands Montets for the North face of the Dru. The next morning saw us head off, or more to the point me stumble off, for the Dru only to find that the Alpine Club guide approach is very much outdated and no longer viable in summer- what is a really quick approach in winter (we had both done it before) turned into a nightmare of choss and loose couloirs. Two hours later and barely any closer to the climb we turned back- as Kenton put it, down to total complacency from our parts…should have recced the approach instead of catching up in the sun the evening before!

Nevertheless, back in town we stocked up and got the Midi lift up and headed over to the Grand Charmoz for the Cordier Pillar. It happened to be Kenton’s birthday the following day so we sat under the Charmoz and had a luxurious fondu in the setting sun. At 4am Kenton tucked into his miniature bday cake and we started to head up towards the pillar. The climb itself is awesome but a little hard for the given grades (crux of 5a?…not likely). The climbing gets better the higher you get and I have never seen so many belays on a route in my life so its all pretty relaxed.

Thanks to Matt and Kenton at Dream Guides Kenton enjoying the evening sun below the Blatiere Kenton on the Cordier Pillar Kenton and the Blatiere in the background Kenton and myself- he’s younger than he looks…honest 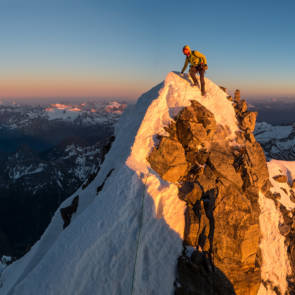 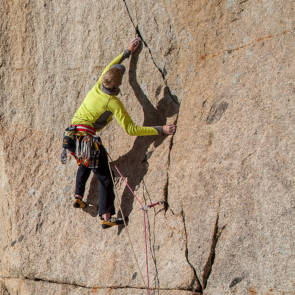 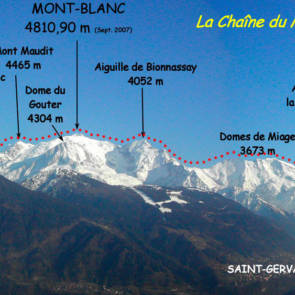 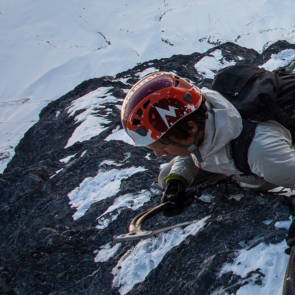