Lots going on over the last couple of weeks. I headed over tot the Verdon Gorge for the Cotswold Spring/ Sumer 2011 catalogue to shoot their climbing section. I’ve never been to the Verdon but thought it looked like an awesome climbing photo destination and I wasnt disappointed. Amazingly exposed limestone cliffs set in a deep gorge with the bluest river running through it. Throw in the local vultures as fauna and you feel like you’ve left France for somewhere totally different. The rest of the Cotswold crew were out in Srik Lanka so it was up to us to co-ordinate all the shots and clothing as well as actually take them so it proved to be a huge undertaking and I got home a few days later pretty shattered.

It’s actually very daunting not having the client around as its up to me to call it when I think we get the shot that they want. Throw in the fact that you have to get the exact clothing and type of shot correct as well and there’s suddenly alot playing on the mind when you’re hanging from a rope 700m off the deck. Added to this I was taking the front cover shot which is something I really cant get wrong!

However it all turned out well especially considering the terrible weather on the first day meaning we had to do 2 days work in the space of one. Cotswold were over the moon with the sample jpegs I sent through so job done thankfully. On the flip side Will and I managed to nip out at the last minute to do a really classic on the Aiguille du Pelerin called the Carrington-Rouse, or if you’re not a Brit, the Terray-Rebuffat. I found out at about 11pm that it had just been done and the next day was forecasted a perfect weather day. Too good an opportunity to miss we started packing late and headed up on first lift. The approach was naff to say the least- 15cm of powder covering a huge boulder field. In any case we started up the route just before noon and after legging it under the huge serac threatening it we made good progress on the route. Amazing conditions for the moment, really amazing. We topped out with a few hours of daylight left and zipped back down the route for the long slog back to town. Really recommend getting on this classic right now- it’s a real gem of a route and nice and easy in its current state. 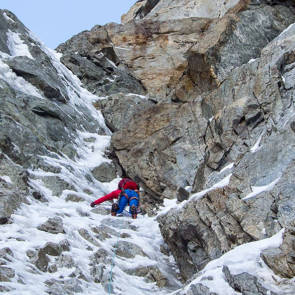 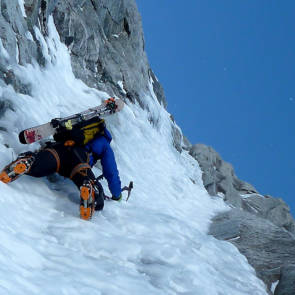 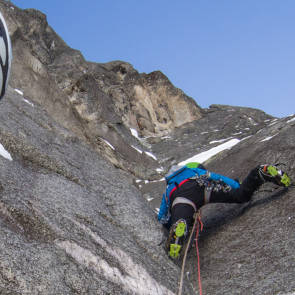