Back in Chamonix finally and it feels amazing to finally be home, even if it is raining sideways for the moment. 4 weeks out on the glacier felt more than enough this year and whilst we didnt manage to get on our main objective it was a really fun trip with good company and relatively good weather. Spending nearly a month on Denali showed us a side of climbing that we’d never seen before: commercial expeditions and it was certainly an eye opener. But Denali also retains its wild side and its even wilder temperatures and when we left the crowds on the West Buttress we slipped back into climbing mode and finished it off with a single push ascent of the Cassin ridge on its South Face.

Last year Will Sim and I had a battle of an expedition to Alaska. It felt like we spent 6 weeks just digging the tent out every day, and I naively just assumed that this was what Alaska was like. Thankfully I was wrong and this year Will and I returned set on trying to climb some of Alaska’s test pieces. It seemed only natural to set our sites on Denali and specifically its immense south face…

Early May saw us do our usual hasty packing and head off to the UK. Cheap flights meant we had the round about route of going via Texas before flying on up to Anchorage followed by the hell of shopping for 3 weeks of food and kit on a monster jet lag.

A quick transfer up to Talkeetna and it was off with TAT to the Kahiltna air strip where the adventure began. Flying into the range again was exciting rather than daunting. You pass and see so many major Alaskan landmarks that you’re buzzing and feel like home by the time you jump out of the plane- it also happened to be my 28th birthday that day so beers and packing of sleds ensued before an early night in preparation for the trudge up Denali the next morning.

Our aim was to get to the 14,000ft camp as quickly as possible, which with heavy sleds and packs is quite the task. But the idea was to get there before the next weather system moves in so that at least you are acclimatising whilst its snowing outside. Our first day we pushed on up to about 9000ft where we felt exhausted and set up camp.

The next morning shone brightly and after a leisurely breakfast we had a much easier day of heading up to the 11,000ft camp. This year we were on our approach skis (150cm) which proved a real pain when skinning up the steeper hills with a heavy sled as there wasnt enough surface area underfoot for the weight.

As the climb from 11,000ft camp to the 14,000ft camp is quite a bit steeper we decided to double carry our loads up there on foot over two days.

We had arrived pretty early in the season for the West Buttress route and 14,000ft camp was relatively deserted which meant no pre dug camp spots. I’ve never built a proper snow wall before with an ice saw and it definitely took it out of us just laying down two rows of the things the next day! But we were finally here and elated that that was the load carrying part of the trip over- from here on in it was fun alpine climbing with light packs…definitely something we were looking forward to.

The weather turned very windy above 14 camp (this was when the much reported first deaths of the season occurred- we spent alot of time with the climber who had decided not to summit when the rescues were going on which was a very sobering time for all at 14 camp ) so we spent about 3 days eating and acclimatising before we started the first of many little day forays up to higher altitude. Our first trip was simply heading up to the next camp (17,000ft) and drinking tea in the sun for a few hours before heading back down. Our short time up at 17 camp confirmed our decision not to spend any time sleeping up that high- the camp is exposed and much colder than 14 camp…which was definitely cold enough! The views from up there though are pretty spectacular.

That day two friends from Chamonix, Magnus Kastengren and Andreas Fransson, arrived at 14 camp and the following day myself, Will and Magnus headed up to the West Rib cut off. A nice short day out and a hair raising ski back down on approach skis (hard pack snow with ice) saw us getting psyched for a summit bid.

However the winds were still strong up high so we headed up the Rescue Gully to Denali pass.

A couple of days later and the winds finally forecasted low (I say ‘low’ but 30mph winds that high up at that latitude is still really horrible!), and so we started off at about 10am from 14 camp and trudged up the West Buttress route. 6 hours later and we were enjoying the views from America’s highest peak.

Our last foray was up the upper West Rib to the Football Field for which Magnus joined us.

Our final step in our acclimatisation involved having a go at single pushing the Cassin on the South Face from 14 camp. Andreas and Magnus left about 6 hours before us meaning that we had a great track down the Seattle Ramp which was awesome as it was a total whiteout so many thanks to them. I managed to have a bit of a spastic moment on the descent though by putting my foot through a crevasse and puncturing my calf with my other crampon point which hurt like hell and wasnt a good start to the biggest front pointing day of my life…

We got to the base of the route at about 7.30pm and brewed up and got psyched for the route ahead.

The Japanese couloir proved a bit of a slow start with hard ice for half its length making progress slow but once up on the Cowboy arete we made good use of the track Magnus and Andreas had just put in before catching up with them at the first rock band.

The first and second rock band past without incident and we stopped for a brew stop on a huge ledge just on top of the second rock band. We’d brought with us a freeze dried meal to eat half way up so we could get rehydrated and well fed before doing the last section but this was where we realised that the gas canister had blocked up with ice meaning no food or water. This was a bit of a problem as we only had a litre of water each with us (we had another as well but it was freezing cold which is best left alone when you yourself are freezing cold!).

So we crawled out of our bothy bag and got on with the massive trudge up to the top of the route. Having left at night it was starting to get really cold this high up the mountain and a fresh breeze meant that even in down jackets and moving constantly it was pretty chilly. This part of the route just morphed into a blur of trail breaking and steady progress into thinner and colder air.

As we approached the summit a strong wind started to whip over the mountain and a horrible looking snow plume was flying off the top. If you’ve ever experienced the bitter wind high up on Denali you will understand the feeling of dread that crept over me- I was tired, very cold, oxygen deprived, and very dehydrated and the thought of taking that wind and snow full on was almost terrifying. In the topo it says that you can circumvent under the summit and arrive at the Football Field which seemed like the best option at the time but turned out to be a further waste of time and energy. 300 feet below the summit and I’d never felt so wiped out in my life, even this simple snow slpoe seemed impossible but somehow we arrived at the top of the Kahiltna Horn. The true summit of Denali is just along the ridge from the Kahiltna Horn but nothing seemed less appealing than that- losing height and getting warm was very high on the priorities!

A brief stop at 17 camp and the rangers kindly let us get in a tent to de-freeze the gas canister…water never tasted so good. The sun had risen by now and the lower we got the warmer and more oxygen rich it got so that by the time we arrived back at 14 camp we felt relatively good but psyched for some food having not eaten since lunch 24 hours before hand.

As for the Cassin speed ‘record’ i’ll just paste in what I have said before hand as I dont think there is much to say.

Heading into the base of one of the world’s biggest faces and onto one of America’s most famous climbs was a little daunting with just a day pack to say the least but we managed to top out in 14 hours and 40 minutes. However we benefited from a track up to the first rock band from two Swedish friends before we over-took them and we topped out on the Kahiltna Horn (20,000ft), not the summit of Denali proper (20,320ft). The 15 hour Mugs Stump record from 1991 was also done to the Kahiltna Horn and with a track in but from the pure ethics side Colin Haley and Bjørn-Eivind Årtun did the Cassin last year to the summit and with no track in 17 hours so they hold the real record. In todays’ climbing world it’s actually more daunting doing something like this and opening yourself up to a barrage of criticism than actually doing the climb itself so those are the simple facts.

Time was starting to run out a bit for us and the weather forecast was looking decidedly mixed for the future so we decided to base ourselves out of Kahiltna Base Camp for logistics reasons. We had wanted to get on the South Face of Denali again for a harder route but the weather wasn’t letting up, and a few days of rain down at Kahiltna saw our second option of the Infinite Spur on Foraker also disappear from our grasps. With continuous lows forecasted for the next week we decided to fly out rather than get stuck at the airstrip which was gutting for both of us as we didn’t get to have a crack at our main objectives. There is always next year… 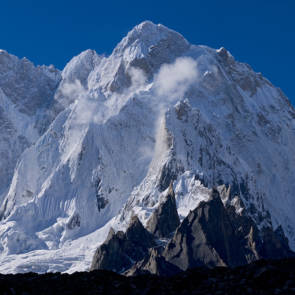 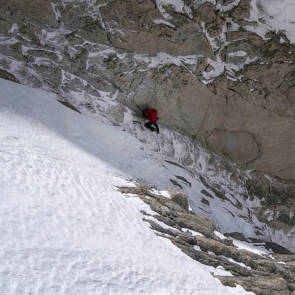 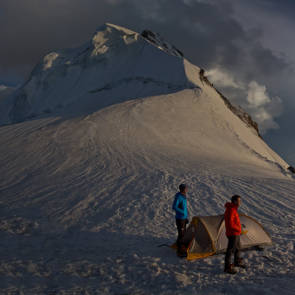 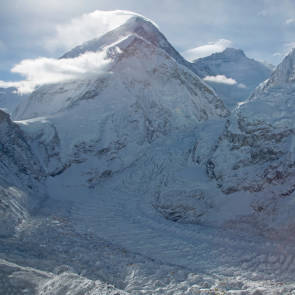