Condensing 8 years of work into just 20 shots has been almost impossible. My first ten were well received so thanks to you all for the kind comments. If you haven’t seen them then click here. The final ten might be perceived as being slightly different in nature- remember that behind the shots there is always a tale; I’ve got a ton of jaw dropping shots I didnt include because there was no real life story behind them. So it’s worth reading the captions to get fully immersed in to each shot….enjoy

I’ve been meaning to do this for a while now, some do it every year but somehow I never get round to it. Maybe it’s because January is a time for being in the hills or maybe it’s because I actually find it incredibly hard to single out 10 best shots from a whole year. It’s easy to pick out the 10 best shots that the ‘average’ person will like; but photography is about more than just capturing the staged epic shots, it’s about capturing the feeling and emotion of a climb, and often that doesnt mean it’s the most eye catching shot. So what is the perfect shot? I guess I dont know and I’ll probably always be searching for it, but I do know roughly, for me, what it looks like.

You have to capture the following three factors: the climbers’ emotion, the mountain landscape / situation, and the climb. To do that is hard because the latter two require you to take in a lot in the picture such as the background and the dizzying exposure, but to capture the human side into this is the crux. The human face is great for conveying feeling and emotion- if you want to shoot the facial features of a climber as well as get the exposure and mountain backdrop in then you’re going to have to shoot on a wide angle for the latter two and get as close as possible due to the wide angle for the former. And yet this creates a problem, it destroys the ‘climb’ part of the image. Look closely and you’ll probably see a piece of gear very near to the climber that he sat on whilst the photographer got in place and made him repeat the moves a few times. Look at the climbers face- does he look like he’s calm and a bit of a hero throwing some cool shapes and poses? Do we really look like that when we’re shitting ourselves on a lead? I know I dont. (NB: I’ve shot like this more times than I can remember). The mere fact that there is a photographer there on a rope is also a great help- at such a close distance he could easily throw down a line to the climber; it’ll make a cool shot for sure but its lost the magic of climbing; the sharp end isnt as sharp when there’s a life raft sitting above you.

Somehow you have to get far enough away so that you can’t help the climber at all- the sharp end becomes true again. Everything changes in the shot- there’s no big open poses, no cool smiles, just that rather terrifying fear in the eyes and a few really awkward shapes that you throw when you’re at your limit. You have to chose your shot- the climber heads off and he climbs the pitch without stopping. This is not to say that I only take these shots- I’m just saying what I think makes the perfect shot. I’ve taken far more of the posed shots than I have of the latter ones, but its the latter ones that really work for me. The key is for the photographer to be completely fly on the wall. Sometimes you can shoot pretty close but be yourself in such an awkward position (ie to the side) that you cant do anything to help the climber either; and it is also totally possible to capture human emotion as well by body position from far away. It isnt always about the face. But for me body position has to be real as well- it’s climbers hunched over, tired bodies, crawling at times, clumsy moves- its not a climber standing on the top of a ridge with a coil of rope in his hand looking like he’s from the Victorian days. The mountains are meant to be tough; we’re meant to find our physical and mental limits there- we’re not meant to look like proud Scottish Stags perched on top of a ridge with the sunrise around us and the Ride of the Valkyries humming in our ears. They say a picture captures a thousand words and to me the following do just that, there’s a real story behind every one of them. They may not be the best in terms of eye catching viewing but the point of my favourite 20 shots I’ve ever taken is that they capture something else than just eye popping imagery; they capture the real feeling of Alpine climbing- and that is something that I still find so hard to capture even to this day. Walking in under a full moon into the Cerro Torre in Patagonia group was quite the experience. It was our first time in the range and our first climb; gradually ascending the glacier and out of the darkness into this lit up arena was just incredible. (Click here for more info) Ueli Steck soloing the crux of the Colton Macintyre on the Grandes Jorasses. It was one of the most mad work days I’ve ever had (read more about it here). Ok yes this shot might be seen as ‘set up’ but Ueli did actually speed solo all the key sections of the route for me. It was scary to film and photograph- speed soloing means you dont double check your placements; you just move. Take a look at his left axe and the drop beneath him and you’ll start to see how ‘extreme’ this style is. We had tried to head down the Midi arete for some evening ski shots but it had been storming all day…a few days in fact. We turned back round and started the long and deep trudge back up the arete when suddenly the clouds cleared for about 30 seconds as the sun set. I have no idea what is going on with the sun, it is identical to the RAW image file. Pretty wild though… Will Sim on the Cowboy Arete on the Cassin Ridge, Denali. A cool reminder of a really ‘out there’ day. We climbed the Cassin ridge from 14 camp to the Kahiltna horn and back to 14 camp in just under 22 hours. It was a fantastic outing and I felt truly spent at the top. Here the sun sets on Foraker in the background as we settled in to a fast pace to keep warm during the freezing Alaskan nights.

The perfect Bivy. On the top of Sulu Peak (6000m) in the Charakusa Valley, Pakistan. We’d had exceptional weather on this climb and the views had been stunning capping it all off with a glorious sunset over enough peaks to satisfy generations of climbers for years to come. (click here for more info) The ice pitches on Late To Say I’m Sorry on the Aiguille Verte are so Alaskan like it’s uncanny. Perfect steep granite corners that fill with bomber nevee. It’s a real classic of the range. This was actually taken on a photo shoot but I had to include it as it reminded me so well of when myself and Will Sim did it many years ago before it came in to fashion and there was no info about it anywhere. It was a really cool day out and we were bowled over by the quality of the climbing. (click here for more info) I really love this shot; it encapsulates Patagonian climbing so well for me. We’d been given a tiny weather window a few days before the end of our trip and we’d given up on single pushing the Supercanaleta on Fitz Roy as it really was that short (the Supercanaleta is the huge ice streak on the right of Fitz Roy which is on the right of the picture). Instead we opted for a climb far up the valley knowing really nothing about it. A huge 6 hour approach saw us climbing thin cracks and great mixed until we topped out on the summit ridge. Right at my back a huge storm was spilling over us from the Patagonian ice cap, hence the ropes. Will tagged the summit and we started a bit of an epic descent back to our tent; it was a perfect light and fast mission. We’d got our ascent; but only just. (click here for more info) Ueli Steck speed soloing the Droites North Face. This is the only one of his speed ascents that hasnt been re-enacted for the camera so this is as real as it gets. Watching from the heli was like getting front row tickets to the SuperBowl! It might take you a few seconds to find him but it gives you an idea of how head strong you have to be to undertake these types of climbs. (click here for more info) Will Sim on the lower reaches of the Freney Pillar at sunrise. The South Side of Mont Blanc really is one of the few wild places left in the range; there are no cable cars and no easy retreats- every climb is a guaranteed adventure. The Freney is the hard classic on this side and attracts scores of strong teams every summer. We’d hit it in pretty wintery conditions and found the pillar and the whole climb to ourselves; a blessing in disguise maybe. (click here for more info) I guess this is an Alpinism blog and no doubt that skiing is part of Alpinism. Eduardo Blanchard is a tall, gung-ho ginger-afro kind of skier, who’ll do pretty much anything for the camera. I’ve seen so many ski shots that I stop taking them nowadays. I think I just get bored of endless powder shots and Alaskan ‘spines’. For me big mountain skiing isnt just about jump turns on steep slopes it’s about negotiating your way past huge seracs and assessing crevasse dangers at lightening speed whilst feeling the avalanche conditions underfoot. This shot kind of captures that- the whole face of this serac would actually release about a week later at the break you can see way at the top (a hole leading to the skyline). 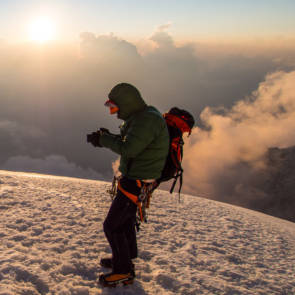 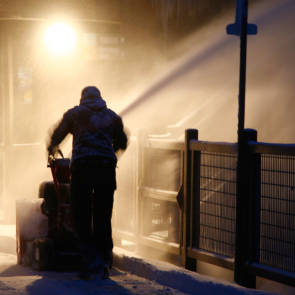 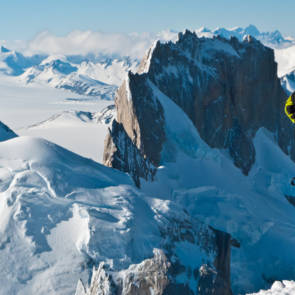 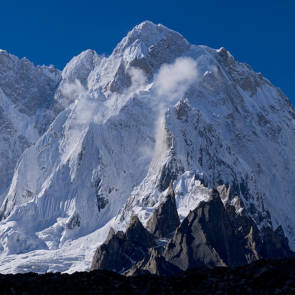