As I’m busy writing up a huge Jorasses article here’s a throw back to some of my coolest shoots ever- the pictures are not necessarily new but the story of how I met Ueli Steck and our first shoot together will be.

Ueli Steck breaks the speed record on the Colton Macintyre. Well he smashes it really to be fair. It is, in his own words, the hardest thing he did speed record wise- it’s not as famous as the Eiger but this was all onsight. A much greater ordeal.

He arrives in Chamonix in his own relaxed way and heads into the base in January on his own. It’s cold. In his usual way he wakes up, gets ready, and flies up the face. I hear about it when I get down that evening but I hear about it from Ueli, no one else knows…and to top it off I’ve actually never met Ueli. He wants to meet up tomorrow; how can you say no? It’s quite the honour- not only is he an alpine legend but I’m just starting to take off on the photography path and I’d do literally anything to be able to photograph the guy.

We aim to meet at the Aiguille du Midi lift but I’m not really sure what we’re meeting about. In any case I go in search the next morning for a 6 foot tall Arian but instead find a beaming small Swiss man extending his hand out to me. How bizarre…not quite what I was expecting. After a couple of hours drinking coffee I hear the whole story, in fact I hear the whole story about Ueli’s life, work and climbs. It’s all a bit surreal sitting there with a guy who is so sponsored to his eyeballs that he even has a bathroom company logo on his jacket.

It gets to crunch time though and he asks me if I want to get some shots of him on the Jorasses next week with him. Jesus what a scary thought. I’m trying to be as ‘hard core’ as I can be though and instead of just blurting out yes, getting on my knees, and kissing the backs of his royal alpine hands, I suggest that we do the shoot on the face. No shooting from a helicopter; actually get on the thing and shoot and video the whole ascent. As soon as it has left my lips I think ‘oh shit what have I just committed myself to…idiot’. But that was exactly the kind of photography I wanted to get in to and what better place to start than one of the Alps’s hardest North Faces with the world’s best Alpinist…like I said, a scary thought.

Dark thoughts were alleviated when Ueli produced a wad of cash for a helicopter ride in- excellent that meant we could just get dropped at the top and rap the whole face. I mean it’s still an incredibly daunting prospect rapping such a massive face but it’s just slightly less daunting to having to climb it with a guy who can do it faster than it takes me to negotiate the intricate manoeuvres of getting out of an alpine bivy in the morning. Psyched. But this is France, the land that practically invented Red Tape. And as usual there is plenty of it.

We can’t get a permit to get dropped off on the summit. Shit. It all just got really serious. I was going to have to actually climb this thing with Ueli, and get some kick ass shots at the same time. I’d never actually climbed the Jorasses; for me it was still a really big deal just to even get on the thing. Skiing in to the base was a mind game – on the one hand I had the opportunity to tie in with a legend of the alpine world, on the other I was going to make a total arse of myself; I mean how on earth do you keep up with the Steck? Luck stepped in here with her massive oversized boot and as we arrived at the bivouac we got a call from town saying it had been granted – sweet jesus, I was going to survive another day. We hurriedly skied back to town and at 8am the next morning I was strapping into my first Helicopter ride.

The flight in was quick and painless, we threw our skis out at the Shrund and slowly ascended the huge face. At the summit we jumped out. Just like that, we just jumped out onto the summit of the Jorasses. I had now been to the top of the Jorasses- it was ridiculous. But all around us the peaks were turning that amazing January sunrise orange and I snapped away still a bit bemused by where I was. Not long after it was time to take the plunge, and we started the descent down the Colton Macintyre.

Ueli being the ever keen lightweight man insisted on bringing two 60m 6mm ropes. Now 6mm is like a shoe lace, it also behaves like a shoe lace and will invariable break when you least want it to. It also flies through your belay device at such a pace that you’re essentially brining Ueli’s speed breaking techniques to the rapping department as well. All good fun and games. So we rap…and rap. When I see a shot I tell Ueli, he raps down and gets on his axes, I pull the ‘shoe laces’ back up and he speed solos back up to me. Then he gets back on and we continue until the next photo and video opportunity.

All plain sailing until you consider the simple facts: I’ve never done the Colton Mac so I dont know exactly where it goes on the descent, I’ve also never rapped down a 1200m face before (I think few have for good reason), I’ve also only got two 6mm ropes and the barest of racks with me. Now this is all totally manageable as long as I’ve got Ueli with me, but here he is re-enacting speed soloing for the camera – it’s a dangerous sport based on never double checking your picks. You place and go – if one of them rips then you’re gone. There were definitely times where I thought that he was going to rip at any second leaving me not only stranded on the face but also the guy that killed (indirectly) Ueli Steck. Not quite the career boost I was looking for.

Amazingly four and a half hours later we arrive at the shrund. We just rapped the Colton Macintyre and got some of the most out there shots I had ever taken. We cheated by rapping the face but those who have been on it will appreciate that as a big feat in it’s own right. We may very well have done the first descent of it. It was an insane experience. But at the same time an amazing one – it was actually possible to shoot the big north faces. Shots that i’d only dreamed of taking were actually on my SD card and really it was the start to the photo path that I now follow – bigger and harder climbs but epic photography; a break from the endless Cosmiques arete and Petit Aiguille Verte photo shoots that people did. For me it was the defining start of a thirst to capture images that no one had ever captured before and to share these magical climbs with the rest of the world; for Ueli just another easy day out in the hills.

Part of a series of picture stories by Jonathan Griffith 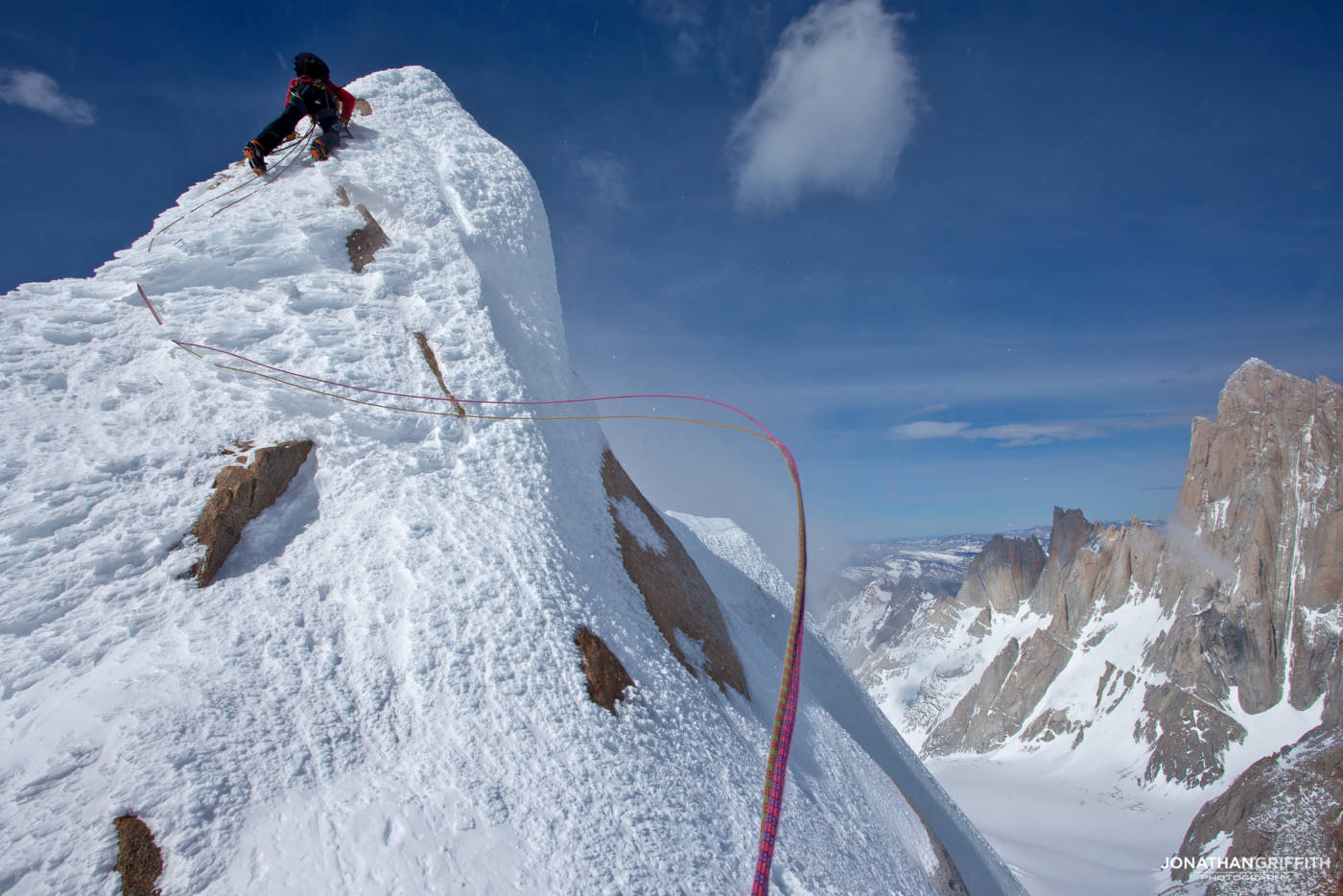