Last week I got to work on a dream project and climb a dream line. It’s the 20 year anniversary of the first ascent of the Andy Parkin’s and Mark Twight’s Beyond Good and Evil on Les Pelerins, and Millet wanted to mark the occasion.

The project is one of those rare beauties that I’d almost do for free as the concept behind it is so good. Essentially Millet are going to come out with a short film about Beyond, combining modern footage of the climb with archival footage of the first ascent and first repeat as well as interviews with all the protagonists involved.

Please note all images are copyright Jon Griffith / Millet, please do not copy them off this blog! If you do then I have to pull the post down, so if you enjoy reading the blog please respect that this is a client shoot and the photos should not be taken from the blog.

Shooting Beyond is something I’ve wanted to do for years, but before I shot it I wanted to actually climb it for myself. On a route like that you get the best shots by knowing the route- knowing the scary bits, knowing where the guy you are shooting is going to suddenly flick out of ‘posing for camera mode’ and flick in to ‘holy shit I’m going to lob’ mode. It’s a style that is rarer and rarer in this world- I find as a photographer you can often get caught up in shooting ‘epic’ rather than genuine;genuine captures fear and reality, epic often just concentrates on stuff just looking bad-ass. The two are not necessarily the same.

I was shooting Sebastien Ratel and Marion Poitevin. Seb is without a doubt one of the best Alpinists in a valley full of them, a climber I respect immensely. Marion had just come back from Zodiac on El Cap 24 hours earlier…quite the brutal reintroduction to winter! Working with such talented climbers on a project that Millet had conceived to be all about the climb and genuine story, not just generic photos, opens up so many possibilities; it was a real joy to work on this project.

In any case, the day before the shoot I headed up Beyond with Ally and Graham. It felt great to be out in the hills again after so much time in the valley; there was not a soul in the basin and we had the whole place to ourselves. Last year Beyond was in the best conditions it has ever been and attracted hundreds of climbers from all parts of the world- on such a mythical route it seemed a shame to just hook the hooks of others and use the foot placements of previous parties. It removes a lot of the mystique and story behind Beyond. So it was great breaking trail in to a route I knew nothing about conditions wise- it looked ok on the approach but ice has been very fickle this year so it was still 50:50 whether the crux pitches would go or whether we were just staring at overhanging snow.

The adventure began and as we quested up the route I found myself on the sharp end of some of the best climbing I’ve done in a long time. Freeing the A1 pitch was slow going but mind-blowingly good. It felt like a special day to have Beyond in such virgin conditions without a soul about (I know that a few teams had been on Beyond but all the rain and snow from the previous week had filled it all in). We rejoined the Carrington-Rousse well after dark but our gamble had paid off, sometimes you just get lucky.

The following couple of days were spent on the shoot- I think word had spread and teams were crawling all over it by our second day of the shoot. Ice was falling everywhere, blood all over the place, bucket steps, but at the same time I was incredibly happy to have done it before it turned in to this. Thanks to Ally and Graham for an awesome day and watch out for the video from Millet!

PS: We didnt do the last two A2 pitches, I can fully understand that this doesn’t make it a proper ascent of Beyond Good and Evil but hey I had a wicked time anyway. Nice one Mr Parkin and Mr Twight 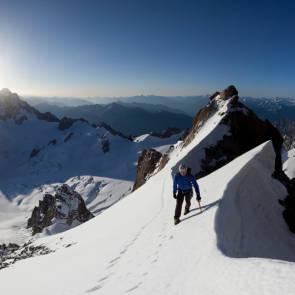 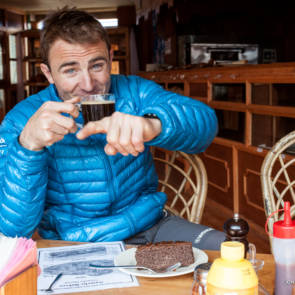 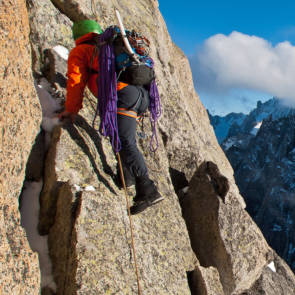 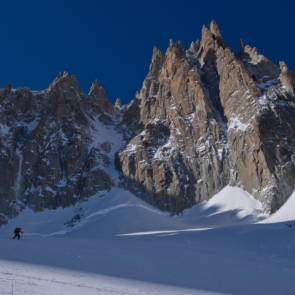