In preparation for the upcoming Pakistan trip it has been all about the training recently. Chamonix, though, isn’t a place where it’s easy to find training partners- especially when the kind of training i’m thinking of involves huge days of plodding rather than technical climbing. Thankfully amongst the many climbers here though there is always someone psyched for crazy mountain shenanigans, and right now that person happens to be Jeff. When I suggested my plan to him he replied back saying ‘it’s a stupid idea, but i’m a sucker for stupid ideas’. Enough said.

My idea was to start off in the quaint town of Les Contamines and essentially traverse the whole Mont Blanc; in a day. A stupid idea indeed. But I was psyched, and Jeff now no longer had a choice. The travese would take us on the integral covering the traverse of the Domes de Miages, the traverse of the Aiguille de Bionassay, joining into the Gouter route, summiting Mont Blanc and then crossing the Three Monts route over to the Aiguille du Midi. A daft plan, as I might have already mentioned.

Going light (apart from the 5D of course) our support team of Ben O Connor Croft dropped us off in Les Contamines at 10.30pm- the idea being that we wanted to take advantage of any possible refreeze. Making good time up to the Conscrits hut, even with a fair bit of navigational issues, we started the march up to the Domes de Miages. Unfortunately the weather wasnt really playing ball- Ben had sent us a text an hour into our climb saying it had starting chucking it with rain in Chamonix. The snow had refused to refreeze as well, and a ‘refreshing’ wind coupled with incessant cloud cover didnt help too much with moral. Neverthless we crossed what I can only imagine were jaw dropping alpine snow riges on the Miages and arrived at the Durier hut where we sheltered from the wind and got a bite to eat. I’m guessing the views up here are stunning….lucky I lugged the SLR up with me! Crossing the last of the Miages, a little damp at this point Back into the clouds Our next objective far ahead of us By now it was early morning. Skipping a night’s sleep and avoiding the comfy looking matresses proved our first crux. Neverthless with some food and water in us we felt recharged and a fortuitous can of Red Bull saw Jeff running for the Aiguille de Bionassay. At this point the weather finally cleared up- blue skies and a warming sun alleviated our weather fears. The mind always seems intrisically linked with what the skies above us are doing in the mountains. Which was the case when 5 minutes later a huge lenticular arrived over Mont Blanc followed a few minutes later by a general grey mass of clouds and a dark rain system moving in from the North. However I felt amazingly awake and fine and Jeff was still firing on the Red Bull cylinders so we decied to carry on until the final rock tower to make our decision. Sunshine and the Domes de Miages in the background Smashing on up to the Bionassay with most of our route taken, and still to go, visible By the time we got there though the weather had definitely deteriorated. Jeff rang up his collegues at the PGHM and it seemed clear to him that bailing was the only option. It was a horrible decision to make as we were so incredibly close to finishing up Mont Blanc and we both felt not in the least bit physically or mentally tired, but sometimes you’ve just got to listen to the voice of experience. A good thing I did too as about 40 minutes later the heavens opened, the Mont Blanc massif descended into a white out, and we found ourselves bailing down the torturous descent from the Durier hut in the rain to town.

Still a good outing out. I have no idea what kind of mileage we put in but it would be a good few thousand meters at least until that point. All good training for the next mission… 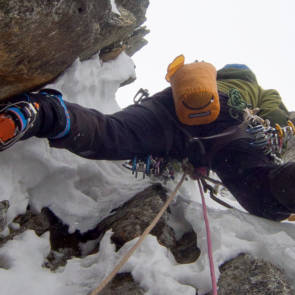 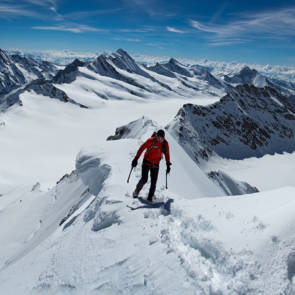 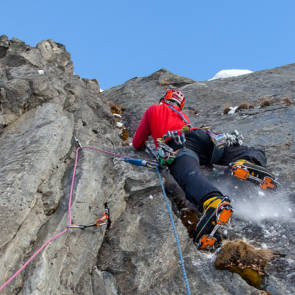 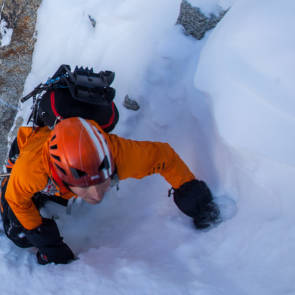