A few days ago I headed up for a shoot armed with my reflector – it’s a rare thing though – I think I only use it once a year. I shot a few snaps and whilst I knew the client would love it I instantly hated it, so I packed it away again. But it made me realise how the outdoor photo industry has evolved in the last couple of years.

Glitzy, poppy, fashion photography has swept like wildfire. We are constantly being subjected to images that aren’t real- either an exaggerated use of post production Photoshop or onsite means such as flash guns and reflectors. Something that my flat mate calls the ‘Sin City’ look, and he’s not wrong. But maybe worst of all is the staging of shots; the gnarly steep ice shots, or alpine aretes that are sold as ‘extreme’ but are in fact about as safe as you can get and right next to a lift station.

It’s sad because the Alpine is such a pristine and real place. One of the main reasons we search for the Alpine is the escape from modern day society- it’s an escape from the things in life that bother you and a full immersion in to your mental and physical abilities. As Greg Child put it “People may say that alpinism is a fools game full of meaningless risk, and they may be right, but I climb because I thirst to throw back the margins of my world…I know that I am the best man I can ever hope to be precisely in those moments of maximum fear and doubt”. It’s a romantic view on a very serious game, but nevertheless one of the finer explanations I’ve read on the topic. The Alpine experience is one of the most genuine ones you can feel- you can’t cheat your way up a big route, you can’t rely on the safety net of modern society; it’s just you and your partner and the climb ahead. It’s pure and very real.

But in the same way that I thirst for these genuine ‘life’ moments on the mountain I try and keep my work genuine as well. I shoot what I see. Digital manipulation is often used to create a feeling or emotion behind a shot; heavy handed Photoshop techniques can be easily used to produce moody skies, textured rock, and vivid colours. But to me this brings in the lies and falseness off a modern society that we are trying to leave behind; in a place where you may find yourself at your most honest and genuine in life it seems sad when I see images taken that have been altered to make them more ‘poppy’ and eye catching to the viewer. It’s a fake filter of modern society applied to one of the last vestiges of genuine humbleness in this modern world; cheap emotions transferred through post processing that are often applied by people who have no idea what a shivering bivy is like, or what a huge single push climb takes out on you. In a bizarre way I can often feel cheated and robbed- why create something when it wasnt there in the first place. If I wasn’t capable of capturing the feel and emotion of a climb then I’ve found my professional crux, but I’ve noticed that we’ll happily circumvent it and gobble up the next eye popping image that falls out of Photoshop.

And whilst this obviously sounds like a huge rant it’s not really trying to be. I respect other photographers for their artistic skill and for their creative talent. I respect those in the industry that excel at their marketing jobs and know how to sell their product. And I respect that many people really like this kind of mountain imagery. But it’s still sad to see. Ian Parnell was without a doubt my first photo inspiration. His photos were amazing not because he spent hours tinkering on photoshop but because he spent hours getting to the actual location. He was a climber first. His pictures were 100% real and that makes them timeless- they arent poppy and eye catching for a few minutes only to be cast to the back of your mind. They were jaw dropping shots of cutting edge Mountain terrain that made people dream. They had real stories behind them and they inspired.

So based on that here’s a picture that embodies all of that. It hasnt been photoshopped (apart from being stitched) and it’s taken on a real climb. It wont flash out and grab your attention immediately but maybe it will inspire you and bring out some deep emotion that you had on your last Alpine climb because at the end of the day thats something that a set-up or ‘Sin City’ style shot will never be able to do.

Part of a series of picture stories by Jonathan Griffith 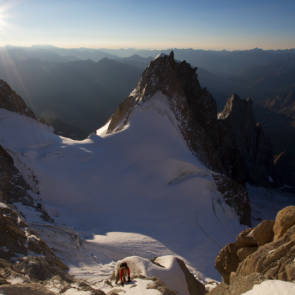 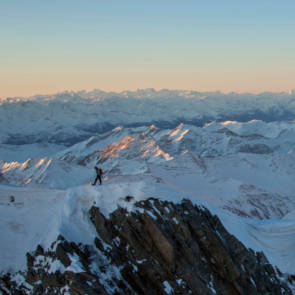 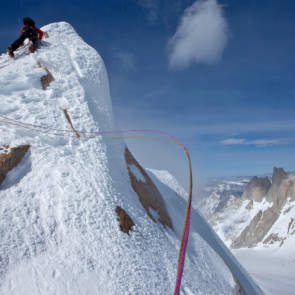 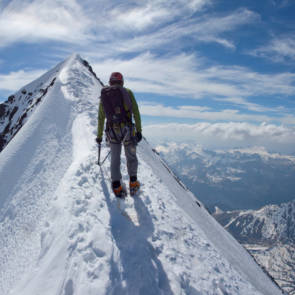